The People’s Power Minister for Culture, Ernesto Villegas, denounced on Thursday that behind the economic blockade imposed by the United States Government against the country hides a policy of human persecution towards Venezuelans, of xenophobia and antibolivarianism that seeks to end the dignity and identity of the Bolivarian country.

His words were expressed in the House of Insurgent History in Caracas, where the General Staff of Culture met to sign against the US executive order – within the framework of the World Day “No more Trump” – and in rejection of sanctions applied by the Donald Trump Administration to Venezuela, referring to the death of Venezuelan singer Fernando Colina due to lack of hospital care in Colombia.

Villegas stressed that this right-wing action plan has tried to turn Venezuela into a bad word and has increased attacks and xeonophobia against Venezuelans.

It should be remembered that the musician Fernando Colina, composer of “Snail Soup”, died Wednesday of peritonitis, after being denied medical attention in time in Villa del Rosario, North of Santander, Colombia, for being Venezuelan.

“It is outrageous that a Venezuelan patriot because of his condition as a Venezuelan, as an artist, as a cultor, has been mistreated to the point of leading him to death in the sister Republic of Colombia. (…) This hostile policy of blockade, of persecution, includes the promotion of the xenophobia of Venezuelans in every corner. The antivenezolanism that hides behind anti-Chavism becomes more and more commun and evident”, he said.

In this regard, the minister urged the entire cultural sector of the country to set a firm stance in rejection of the criminal blockade imposed by the ‘gringa’ administration and to demand, with concrete actions, justice for Venezuelans who have suffered the consequences of these aggressions.

Great cultural force against the blockade

To do this, he ordered the former Vice-minister Jesus “Chuy” Pérez to lead the formation of a great political-cultural movement that flies the flags of socialism and reaches all the communities of the country, in order to deploy a concrete agenda of actions that strengthens the revolutionary fight from the field of the arts, and allow a permanent space of participation of the creative people, that goes beyond the bureaucratic responsibilities.

“What the Venezuelan people have done at this time, resisting and standing up and worthy, has a lot to do with the cement of national cohesion that these artists and creators provide us with identity”, he added.

Among the people who accompanied and supported Villegas in the collection of signatures against the criminal blockade and who are willing to contribute to the constitution of that great cultural force of the country are: the singer Lilia Vera; actress Dilia Guaycarán; the singer-songwriter Ali Alejandro Primera; the musician and Vice-minister of Culture, Ignacio Barreto, and the Vice-minister of Identity and Cultural Diversity, Alejandro López, among other artists and creators.

Let’s recall that the campaign “No More Trump” was convened by the President of the Republic, Nicolás Maduro, in rejection to the coercive measures taken by the US Government that aim to end the Bolivarian Revolution. This world day began last Saturday, to date it has exceeded one million signatures and it is intended to send them to the United Nations Organization (UN) in September to denounce said blockade before the global body. 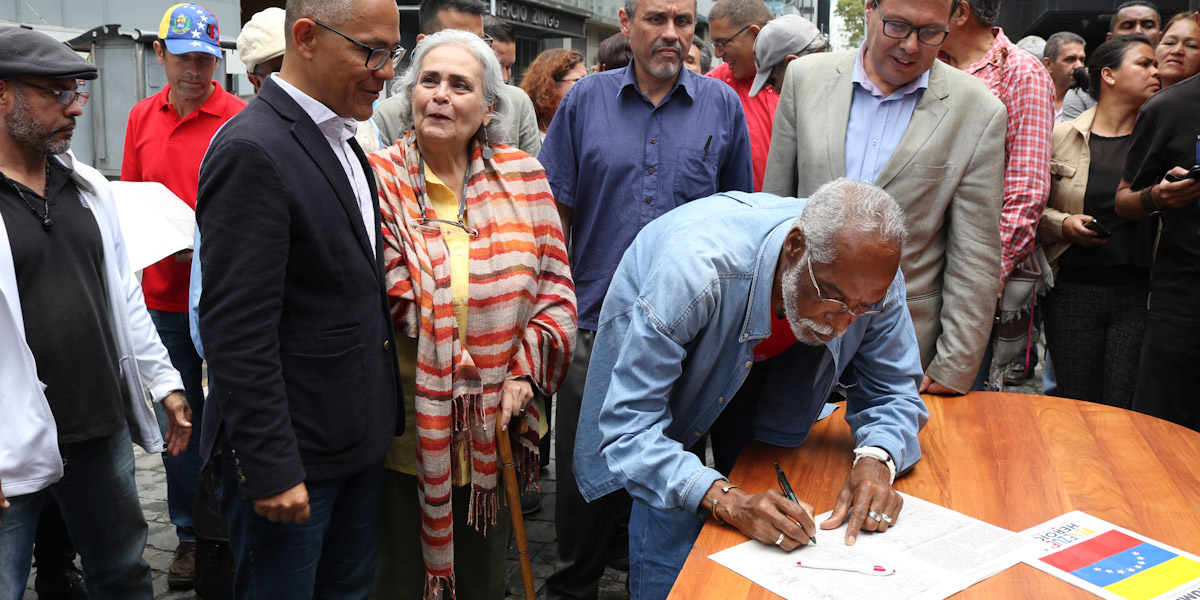