From the city of Belgrade, a historic place where the First Summit of the Non-Aligned Movement was held in 1961, they gathered at the headquarters of the Venezuelan Embassy, ​​activists from various political movements, social and solidarity organizations of Serbia in unconditional support to the president, Nicolás Maduro and the people of Venezuela.

Ratko Krsmanovic, president of the Intellectuals Network, Artists and Social Movements in Defense of Humanity – Serbian chapter, expressed his concern and alarm at the dangers that hang over the Venezuelan land whose embassy they visit to express their solidarity and support.

He stressed that the support for the Homeland of El Libertador Simón Bolívar and its legitimately elected president is reiterated today in the face of US imperial aggressions, always hungry to expand, to usurp the alien and to sow unhappiness and suffering, brutally violating all the principles of international law regardless of the pain and death of innocent beings.

In thanking the protesters, Ambassador Dimas Jesús Alvarenga Guerra highlighted the willingness of President Nicolás Maduro to dialogue with the opposition forces to find a peaceful and democratic solution to all internal affairs.He added that this new financial terrorist aggression by Donald Trump is carried out in the context of an alleged International Conference for Democracy in Venezuela, convened by the Lima Group and in which more than 54 countries participate.

Received with excitement, the ambassador of Cuba in Serbia, Gustavo Tristá del Todo, reiterated the total permanent support of his country to Venezuela and the noble Bolivarian cause, which is increasing today before the attacks of the United States and its pawns in Latin America and the world .

At the end of the demonstration, the Belgrade Declaration was publicly read, signed by all groups of friendship and solidarity with Venezuela, in which it states that “citizen associations and political organizations in the Republic of Serbia, motivated by the ideals of anti-imperialism, justice, peace, understanding and solidarity with the people of Venezuela, they express their overwhelming repudiation to the discriminatory measures ordered by the Donald Trump government against the Venezuelan economy and society, thereby preventing the State from buying food, medicines and basic supplies.

Believing that “poverty and slavery are not inscribed in the stars”, they defend their right to utopia, and the people of Serbia, after a sobering experience in 1999, tell them that imperialism must and can be resisted.

Subsequently, the collection of signatures was requested, calling for an end to the blockade and aggression against our country. 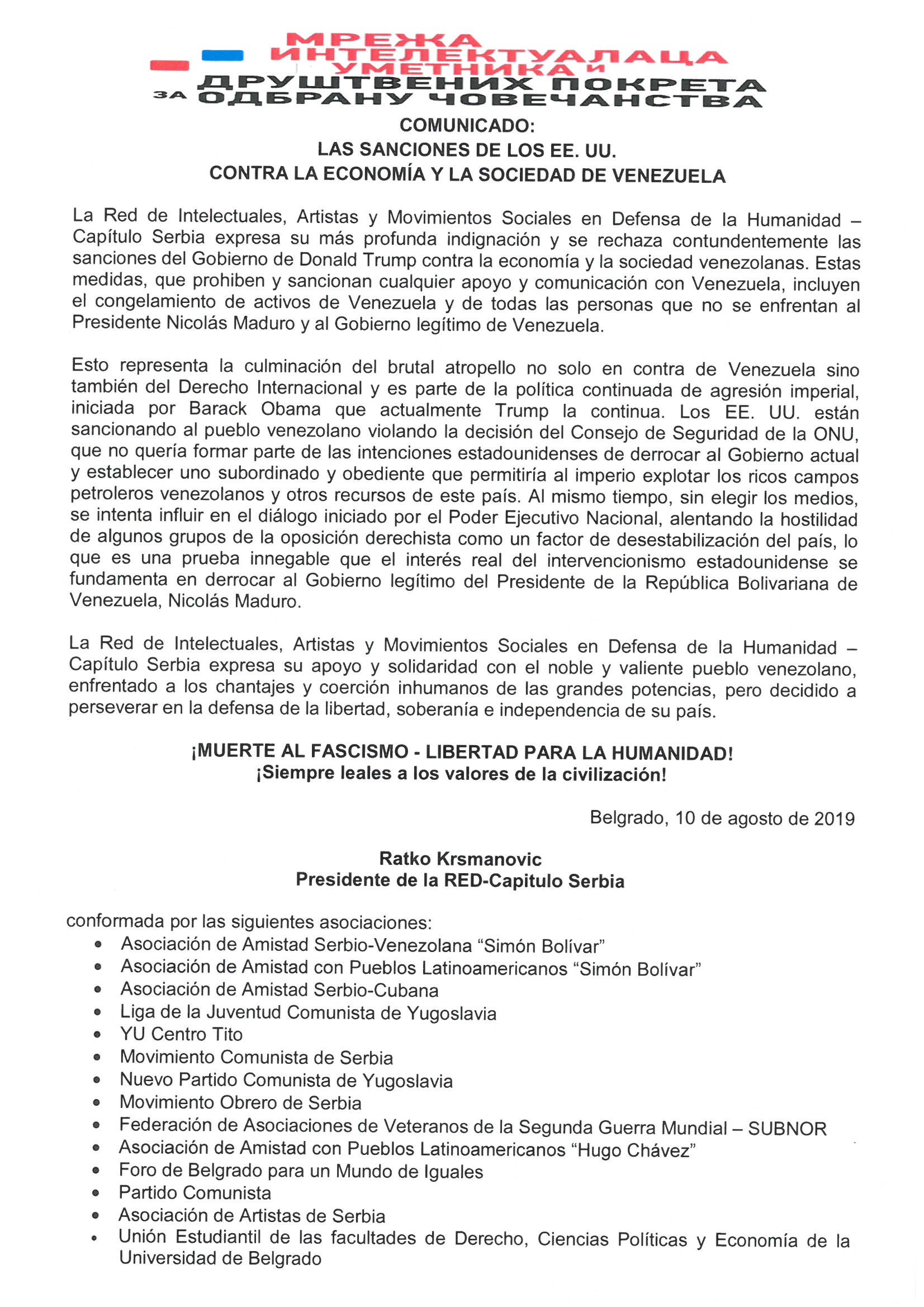